On our most recent long-weekend escapade, we decided to make use of our free Parks Canada Discovery Pass, and take a trip down to Point Pelee National Park. We are glad that we did! Point Pelee National Park is located in Leamington, Ontario, which is approximately a 2.5 hour drive from our hometown – definitely do-able for a day trip out of the city! The park, although may seem massive to some (us, included) is actually one of Canada’s smaller national parks, but that doesn’t mean that it is limited to what it has to offer. A quick google search can tell you that there are multiple different ecosystems, meaning lots of different wildlife for you to witness and explore. There is also lots to do and experience, and we’re about to share our experiences with you!

As mentioned, we lucked out with a long weekend, so we took a weekday and drove down to Point Pelee National Park, hoping to avoid the crowds (and highway traffic jams) – it worked! When we got to the entry gates and were waved through after showing our Discovery Pass, there was a lot of available parking which was definitely a win. We ended up driving quite a way into the park, and pulled into North Beach to give our dog a chance to run and have a swim to cool off in Lake Erie. Pro Tip: Dogs ARE allowed in Point Pelee National Park, as long as you behave as a responsible pet owner – make sure pick up after your pet and keep him or her on a leash, and you’re good to go! There was hardly anyone on the beach, so there was plenty of parking. What we thought was nice is that there are accessible washrooms and drinking fountains right in the beach parking lot – makes it easy, especially if you have small kids with you!

After our romp at North Beach, we hopped back into the car and drove down to the next stop: the beautiful Marsh Boardwalk. This was a very cool experience. Once we parked, we headed straight to the boardwalk base which had a giant wooden tower acting as a lookout to see the entirety of the boardwalk loop! (If you want to see a 360-degree photo from the top of the tower, head over to our Facebook page!)

At the start of the boardwalk, there’s an oversized info-graphic about what you may see along your walk! 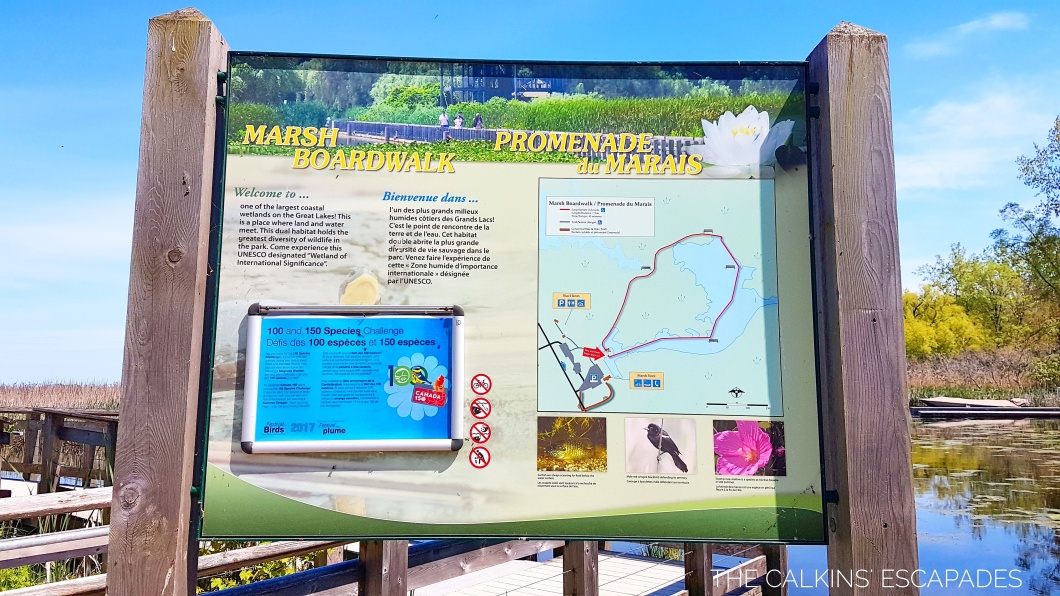 In the park, there have been over 390 records species of birds, many of which you can see at any given time in the marsh. The ones we saw most frequently were red-winged black birds and barn swallows. We also saw a lot of fish in the shallow waters, and a few snapping turtles popping their heads up for air periodically. The boardwalk is a very calm and serene place, so try to keep noise levels to a very minimum so as to not disturb the nature, or other park visitors observing their surroundings. 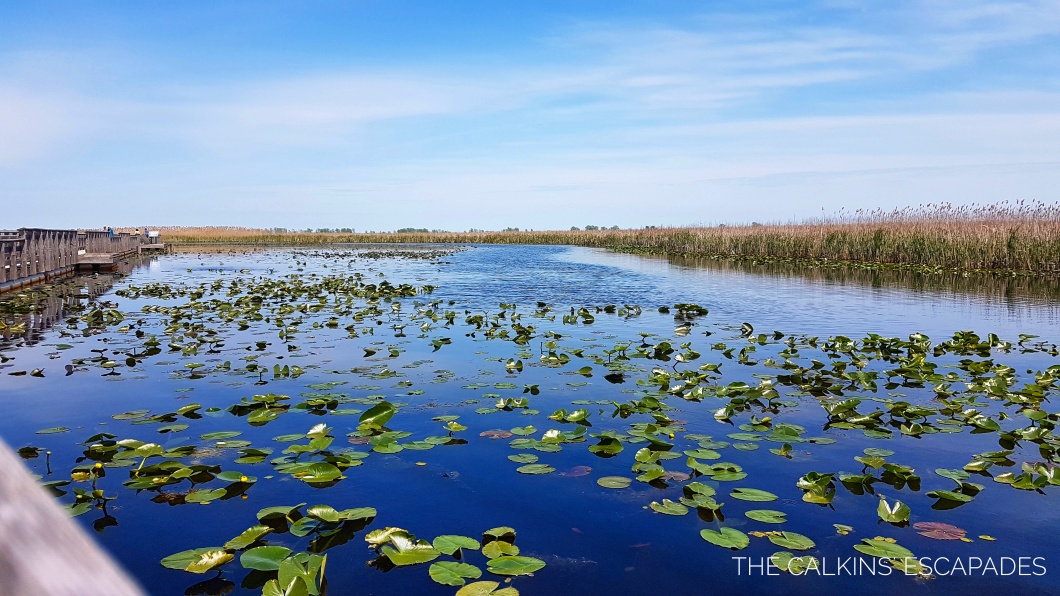 After we completed the loop at the marsh boardwalk, we decided to head down to the “point” of Point Pelee National Park – did you know that it is officially the southern most tip of Canada? We drove as far as the visitor’s centre, where we parked, due to the fact that the gate signalling the shuttle was the only traffic allowed beyond this point was shut. Having our dog with us, we decided that it would likely be best if we avoided the shuttle and walked the 2.5km trek to the tip. 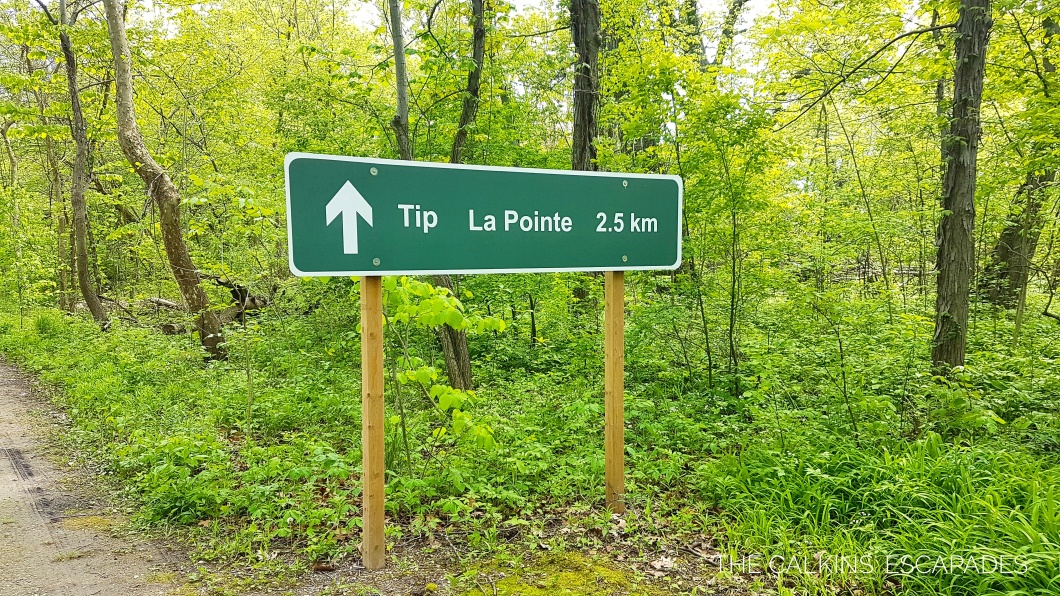 Having been walking for not even 10 minutes, out of no where (it felt) there were a number of cars that were driving past us on the paved trail. We at first were confused, but turning around we saw that the once-closed iron gate was now open! Shuttle services to the tip stop at 4pm on weekdays, and it was now after 4! We decided that if we wanted to make it there sooner rather than later (and not walk another 2.5km to get back to our car) we should retrieve the car and follow suit! Obvious pro tip: If you don’t feel like taking a walk to the point, and time is on your side, wait until 4pm and drive your lazy ass there like we did!

The drive was lovely, and once we made it to the last parking lot (likely where the shuttle parks during hours of operation) we still had a bit more walking to do. This hike was specifically special because we were surrounded by the lake on both sides, and the sky and water were practically the same shade of blue with what appeared to be a storm in the distance.

After a few more minutes, we found ourselves (finally) at the tip of Canada! The tide had risen and there were signs warning guests to not wade into the water, but it was definitely lovely to experience this place! 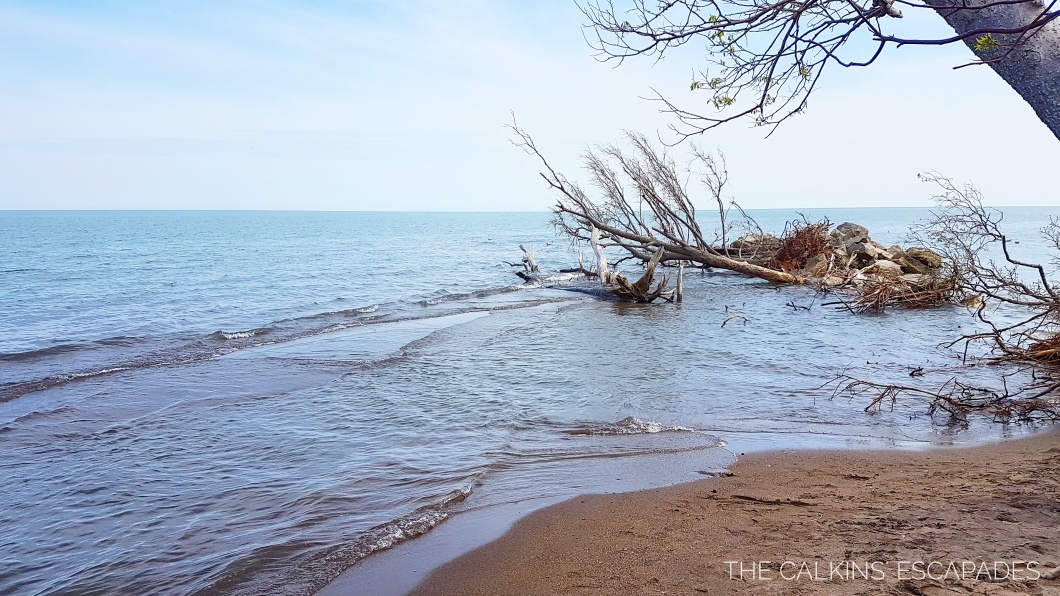 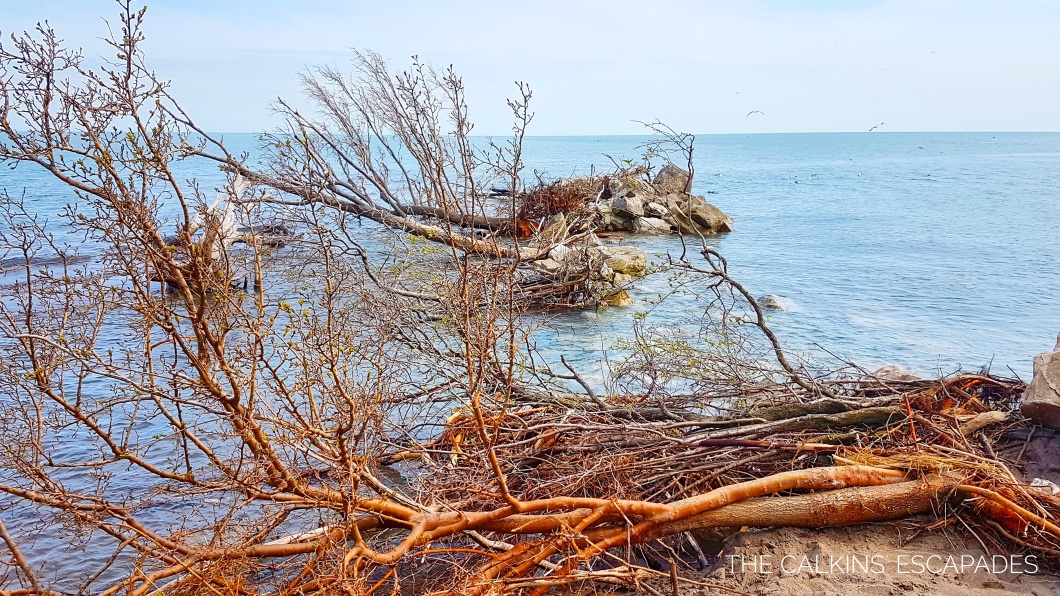 On our way back to our car, we actually ended up walking down the other side of the point because we managed to find yet another trail! We were happy that we followed our dog’s nose, because she led us to another visitor centre, and the giant 42!

There was so much more to see from this point, but it was starting to get late and we had a long drive back home. So, one more beach and one more trail it was!! We headed back to the car and went to West Beach, and found an interesting trail among the sand. It was so hot in this area that there was actually a completely different ecosystem here than there was in the forest. This one had cacti! It was so neat to see these guys in Canada, let alone Southern Ontario.

We thoroughly enjoyed our first trip to Point Pelee National Park, here in Canada. We saw a lot of unique ecosystems containing a bunch of interesting wildlife that you wouldn’t typically see in the city. If you’re up for an adventure, we would definitely suggest that you check out this great Canada Park! Although we didn’t stay for long, that doesn’t mean that you can’t! Point Pelee National Park has numerous campgrounds on site, and is dog-friendly, so be sure to bring yours along! There are also a number of mini shops on site where you can purchase snacks and souvenirs. You can even rent canoes and kayaks in certain areas of the park as well! Check out the official Point Pelee National Park website to learn more!

(Hey, still reading? If you want to keep up with our escapades, feel free to follow any or all of our social media accounts if you haven’t already! Click on the links below!)